Making casts and copies is also a technique I use. Not only copies of Stone Age tools and arrowheads, but also bases or artificial bodies to stuffings, are things I cast.

In addition, it’s also possible to make copies of old brackets or other decorative objects that need restoration.

The mould is performed in silicone or, in a few occasions, Alginoplast (as we know from the dentist).The object is then cast in epoxy, plaster, jasmonite, latex or polyurethane (PU) foam. Look here for a photo report on how to make a casting mould.

A good mould can be used many times.

The colour is either mixed in the cast material or the item is painted afterwards, sometimes in a combination. As a conservator, you have to pass the Ishihara coulorblindness-test. Air-brush techniques and retouching is taught in seminars. 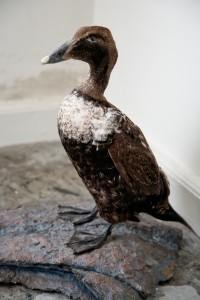 This Eider is standing on a copy of a piece
of cliff from Kulen (S), cast in fiberconcrete. 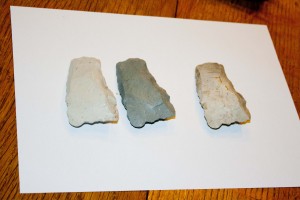 Stone age axes, cast in epoxy (m) and jasmonite (l),
the one to the right is the original.